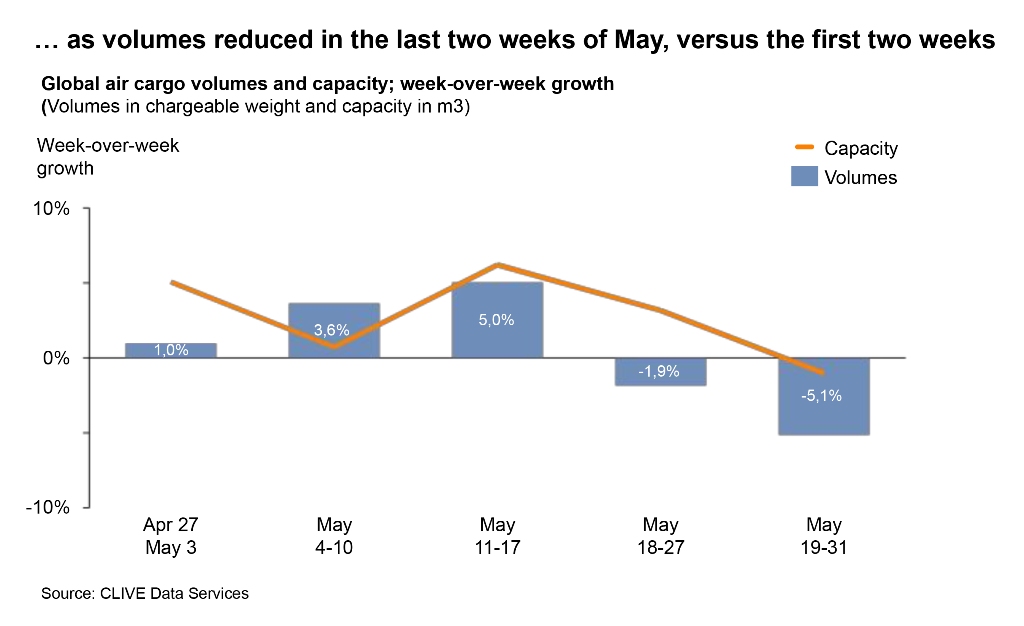 Global industry data for May supports the continued small recovery of air cargo volumes but a fall in demand over the last two weeks of the month may signal more challenging times ahead as airlines return capacity to the market.

As hinted in CLIVE’s data last month, the industry has passed the (initial) bottom. After a -37% decline in volumes year-on-year in April, the corresponding figure for May of -31% shows a slight upward curve and, measured alongside a capacity decline of -42% versus last year, the pressure on capacity remained high. Consequently, CLIVE’s ‘dynamic load factor’, based on both the volume and weight perspectives of cargo flown and capacity available, increased month-on-month from 67% to 69%.

But, just as March and April were a story of two tales, so is May. March ended far worse than it started, while for April it was the other way around. Looking at the most recent weeks, it is clear that May ended weaker than it started. After a series of week-over-week growth in volumes, a decline set in during the week of May 18-24, followed by an even stronger decline for the last week of May.

During these last two weeks, the capacity growth rate versus the previous week was higher than the volume growth, thereby reducing the dynamic load factor for the first time in weeks by 0.5%. This easing of pressure on capacity had a downward impact on freight rates on major trade lanes, as recently reported by the TAC Index.

“Looking at the last 12 weeks, it is clear to see that market volumes remain erratic and that this will continue for the foreseeable future. This is one of the few certainties we have at the moment. We can see some dark clouds gathering and this is a cause of concern for air cargo. This is why, in navigating these uncertain times, weekly data becomes not only relevant to decision-making but crucial. Knowing what is happening each week gives the industry the clearest direction,” CLIVE’s Managing Director Niall van de Wouw said.

“We do not see signals yet that the increase in capacity is being met by growth in demand. With the announcements of increases in passenger schedules, global air cargo revenues may suffer ‘collateral damage’ of more capacity returning to the market,” van de Wouw added.

Ritika Arora Bhola - January 23, 2021 0
DB Schenker India recently commemorated its 25th anniversary since its inception in 1996. Over the years, DB Schenker in India has undertaken various...

Identifying goals and metrics as companies frame their 2021 story